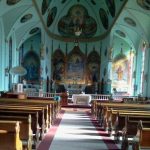 The Mission was listed as a national historical site in 1973 and is open 9am to 5pm in the Winter (weather permitting), and until 7pm in the summer, seven days a week, for self-guided tours.

The Mission in St. Ignatius consists of four buildings: the 1891 church, the original 1854 log church and residence, the 1864 Providence Sister’s residence, and the 1960 Rectory. The most predominant of the buildings is the church itself.  Construction began in 1891 and took two years to complete.  All materials were sourced locally with the bricks made from local clay and trees milled on site.

The interior of the church contains fifty-eight murals painted over a fourteen-month period in 1904-5.  The murals have been restored in the early 2020s and are a MUST SEE. The Colors are astonishing. The original artist was a Jesuit Brother who served as the Mission cook.  Brother Carignano, SJ, (1853-1919), with no professional training in art, completed the paintings between his regular duties as the Mission cook and handyman.  The paintings depict scenes from Hebrew Scriptures, the New Testament, and the lives of the saints.  The triptych behind the main altar show the three visions of St. Ignatius of Loyola for whom the Mission (and town) are named.